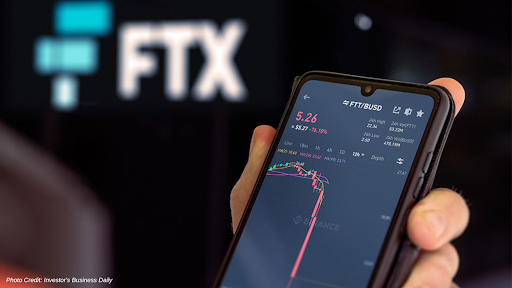 I’d like to preface this by saying the information below does not directly affect MRAP or our ongoing operations. It is an event that’s shaking up the crypto world.

By now, I’m sure you’ve heard about the controversy surrounding one of the world’s largest cryptocurrency exchanges, FTX.

It was a venture supported by marquee investors, politicians, and celebrities — at its highest, it reached a $32 Billion Valuation.

After a series of shocking events, its chief executive, Sam Bankman-Fried, resigned and the company filed for Chapter 11 bankruptcy protection…

Leaving behind an estimated 1 million FTX customers, and other investors, who could not withdraw their assets. FTX owes its 50 biggest unsecured creditors nearly $3.1 billion.

Why did they file for bankruptcy?

According to a company statement posted on Twitter on November 11, their plea for bankruptcy is “to provide the FTX Group the opportunity to assess its situation and develop a process to maximize recoveries for stakeholders.”

How does FTX make money?

FTX debuted its own crypto-exchange token in 2019 called FTT. The digital currency was once valued at a high of almost $80. Today, there are almost 250 million FTX Tokens in circulation.

What customers didn’t know was that tens of millions of tokens weren’t widely distributed, which is key in having a market determine the price or value of any currency.

In fact, a lot of FTT belonged to FTX and its affiliated companies, and Bankman-Fried’s hedge fund, Alameda Research.

Reportedly, Alameda was borrowing from FTX and used the exchange’s in-house cryptocurrency to back those loans. To meet its debt obligations, FTX borrowed from customer deposits to quietly bail out Alameda.

Bankman-Fried admitted this move in his interview with the Times but he declined to disclose the exact amount.

A not-so-classic case of overleveraging

To put it simply, this is an exchange company that overleveraged itself based on a token of its own creation. It was a crypto empire that was colossally mismanaged and potentially fraudulent.

The CEO of the crypto platform Binance, a rival of FTX, said in a tweet, “Due to recent revelations that have come to light, we have decided to liquidate any remaining FTT on our books.”

The price of FTT dropped sharply.

How will this affect Bitcoin?

It’s clear that the crypto world has been shaken by FTX’s bankruptcy and unfortunately, the price of bitcoin has tumbled again.

“Every one of the victims of the FTX fiasco could have avoided hardship had they simply bought Bitcoin, held their own keys, and taken self-sovereignty of their wealth. Bitcoin enables them to do that…

With Bitcoin, no one can control it, and no one can print more of it. It is digital sound money. Fraud can’t change this, and it never will.”

While cryptocurrency is inherently a high-risk, high-reward industry, our operations are not structured to be affected by illiquidity events.

The case of FTX is without a doubt a crypto-horror story for the books — but in the face of the recession, crypto winter, and much more crypto is still a $900 billion industry.

Are you ready to see what investments might work for you?

Fill out this form to get on MRAP’s Bitcoin Deals Advance Notice List or book a call with me.

Previous How did we discover helium? Next What’s driving the global helium shortage?